This is what really sweaty sweat equity looks like.  Spoiler alert: it’s not that interesting!  It’s hard to get good photos when everything is getting dusty, your phone is hidden away for protection, and you are wearing gloves.  The flooring guy asked why I am taking up all the carpet myself.  The best reply I could come up with is because I’m cheap.

Here are the dark ages of carpet, the first hour I owned this house, before I promptly ripped up all the first floor carpet that afternoon.

Already brighter even with the pile of carpet.  This is the same afternoon if you can believe it.  This is a different view of the first room shown above. 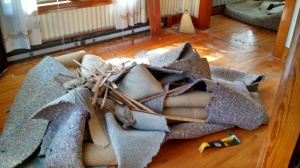 That streaky stuff is dried and pasty former carpet padding, which is why I was talking to a flooring guy.  Everything I have done so far has been basically free, but the floors will need professional intervention next.

Some portraits of yours truly.  I snagged these coveralls for $37 at Cabelas.  I already owned the sweet hat and respirator mask.  I might just go as a house renovator for Halloween.

Bathroom progress.  I can’t believe they carpeted a bathroom.

More carpet mysteries.  Under the *kitchen carpet* was… yet another carpet.  AND some tile under the 2nd carpet, not shown.  And then more hardwood under that.  Salvageability TBD.  And don’t get me started on the mindset of a person who would glue tiles to perfectly good hardwood.  PS the bathroom also had tile between the wood and carpet.

The Stairway to Heaven… the heaven of not having to work on the stairway anymore. 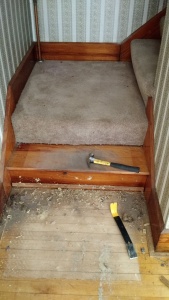 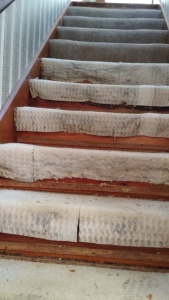 Consistent with the prevailing theme, I did not get a “finished” picture because I jumped for joy and immediately started drinking beer as soon as this was done.  I calculated that it took me about 30 min to strip a single stair, but after 3 stairs my arms would go all jiggly and I could not do anything else for the rest of the day.  So in effect, stripping 3 stairs took me a whole day.  And there are 12 stairs, as every single flooring guy pointed out in his respective quote.  I now see why they charge extra.  Stairs are terrible.

I couldn’t capture why it is so hard to strip stairs in the photos.  But it has to do with stripping tack strip from vertical surfaces while balancing on stairs with little leverage, followed by carefully pulling stapled padding out without ripping it.  You avoid ripping by basically rolling it over and pushing it over on itself (if you just pull up, the woolen padding will pull away from the staples and make a hole, and you risk having powdered rubber padding flying everywhere).  And you have to do this while pressing your hands on the business end of the staples, because if you did it right the staples came out with the woolen padding.  It’s basically just terrible.

And finally… some oddities.

That pale stuff in the upper left corner is some sort of linoleum paper designed to look like hardwood.  Stapled to actual hardwood.  Don’t ask me.  I don’t know.  And the small black dots represent thousands of staples still left in the floor which I had to pull out with needle-nose pliers one by one.

This is one of two phones left in the house, both rotary, both from a time when Hudson was apparently part of the 617 area code.  I am not sure yet whether they are quaint or creepy.

So that’s what I’ve got for now; I would estimate that my friends and I have put at least 60 man-hours into reno.  If you were counting, this could be estimated to be worth about $4K.  But I won’t count, since I have not been tracking and because I would basically be doing useless stuff with my time like reading Facebook otherwise.